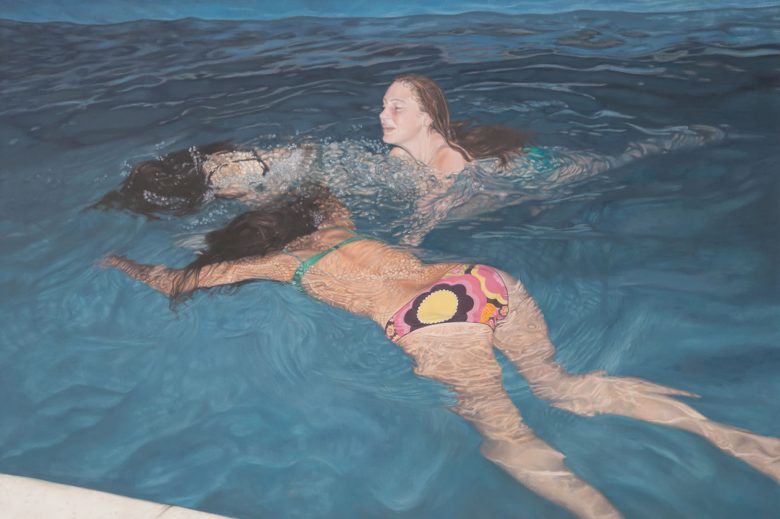 Charly Galuppo brings the intimacy of others closer with disturbing paintings created from photographs taken by teenage girls.

When getting to know Charly Galuppo’s art there’s something that immediately is revealed as photographic. It is not so much about the realism he pushes to the limit –– that may produce for a moment the feeling of being in front of photographs instead of oil paintings –– but it has more to do with what is revealed, with the framing and the instant.
Many of the twenty paintings that constitute Bruma Púrpura (Purple Mist), exhibited these days in Room 20 at the Centro Cultural Borges, transmit something that is also present in the photographs that inundate the social networks, such as Instagram or Facebook, especially those which literally millions of teenagers from around the globe take and post every day: everyday intimate scenes, mostly in solitude, with a framing that is supposed to be casual, as if a camera was shot accidentally every few minutes to capture the model and their life, or like a “crazy camera” from Big Brother. That casual look, pretended of course, is, in fact, selfies that both exhibit and hide, veil and unveil. A game of narcissism and seduction, which at the same time welcomes voyeurism and seeks to hide, which we have gotten used to, those of us who –– though with some perplexity –– have stuck our nose in the lives of others, from friends to complete strangers, through the social networks. Anyway, those photos are not the kind that are kept to later on become fond memories in an album or a shoe box; they are images consumed at the moment and soon forgotten, photos that show the present and not –– as it used to define photography until a while ago –– the past.

In Bruma Púrpura, Charly Galuppo chooses to paint out of those photographs that turn intimacy into show and that are not taken by him, but by the models themselves: middle class teenage girls, as part of a group or in solitude, in a swimming pool, a bedroom, the beach or the woods. He chooses those images and paints them, in an operation that turns trivial and, hence, boring photos, into disturbing paintings. Perhaps because they transmit the mix of boundless vitality and boredom that characterizes adolescence; perhaps because the thorough detail, the closeness and fragmentation of the bodies and the concealment of the faces, the identity and –above all, the eyes of the models –– charge the images with an eroticism that puts the viewer in an uncomfortable position. The feeling of being peeping, of looking for something that wants to be –– but it is not entirely –– revealed in the images, becomes more intense with some kind of veil that seems to cover Galuppo’s paintings, shading his palette, as if behind a thin transparent fabric. Perhaps the purple mist from the title?

Curated by María Carolina Baulo, the exhibition’s set-up, light and sound intensify the atmosphere of intimacy, one of the canvasses being set up as if for the theatre. There’s also special room for “The embodiment of matter,” Galuppo’s self-portrait that quotes –– such a manifest –– a self-portrait by Lucian Freud (“The Painter Surprised by a Naked Admirer,” 2004) and can evoke Velázquez. That central place seems to be related to something that Rodrigo Alonso wrote in the catalogue. Alonso speaks of certain “distancing” of Galuppo from the scenes he paints, but he adds: “Galuppo doesn’t quit his role as author. He is conscious of that place, values and puts it into practice. There’s a clear intention in his work to examine the world we live in and invite us to reflect on it. And in doing so, he highlights one of the main potentialities that have characterized painting throughout its history”.

Read the original article at clarin.com by Eduardo Villar (spanish only)