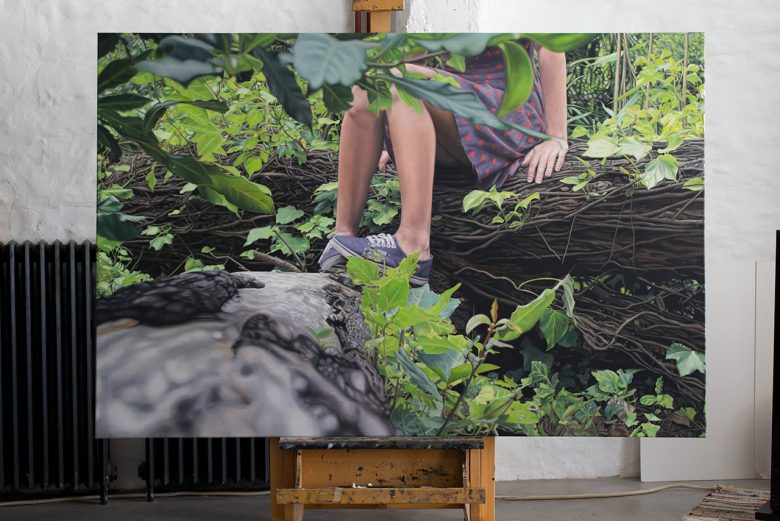 When visitors look at the “Bruma Púrpura” (Purple Mist) exhibition, which opened a few days ago at Centro Cultural Borges and continues until April 30th, they get the vast confusing feeling that photography and pictorial representation are coming together. It is necessary to take a closer look at each one of the different-size canvasses to understand that they are oil paintings and not photographs.
“I work with the concept of photographic realism,” says Galuppo. “This exhibition explores the intimacy of the word of the teenage-girl, and it does so subtly, partially. Though I do work over real photographs, they were not taken by me but by the girls themselves without knowing the aim of the exhibition. If I had taken them, the girls would have posed, and no matter how insignificant their poses could have been, I aim to capture reality, not the pretense of that reality when in front of the camera’s eye. There’s a random effect, fortuitous, over those captured images that I then transform through the oil, but by always sticking to realism. The public gets the feeling of a both a photographic image and a cinematic piece, with images of the ocean at the back, and its sound.”

Galuppo defines himself as “classic” when it comes to the treatment of the image; a classic artist who does not give up on contemporaneity, but strengthens it through his pictorial procedure and his treatment of the material. “For the original exhibition I had planned twenty canvasses,” he continues, “but they are actually twenty-one, since I made the last-minute decision to include, in conversation with the other canvasses, a kind of self-portrait that quotes Lucien Freud, one of the artists that has inspired me the most “.
The exhibition, curated by María Carolina Baulo, was originally planned in August last year. “It is set up in groups of 3, 4 and up to 5 canvasses, which interrelate,” she comments.“Galuppo explores an intimacy that does not belong to him, said critic Rodrigo Alonso at the opening. He delves into the vital universe of some teenage girls whose everyday life swings among puerility, boredom and continuous seduction, and he portrays it with the calm thoroughness of a surgeon. To achieve this, he works over the photographs taken by the protagonists themselves, who bring their perspective as participants to the situations and framings. A perspective that is crossed by the visual configurations of our times, ranging from instant photographs, peeping curiosity, and selfies”.
Curator Baulo asserts: “Charly Galuppo’s work shows exquisite craft and high technical skill. It is just the kind of work that, compared to many of today’s artistic proposals, finds itself at the center of debate due to its realism. Does the current scene accept the persistence of certain choices that seem to belong to other times? The XXI century experiences a democratization that finds no precedent and allows for an ‘anything goes’ approach, but that should also face questioning that puts the artist’s work in crisis”.
Galuppo, born in Buenos Aires in 1976 and owner of numerous awards, is planning a future exhibition about the intimacy of the artist at their studio.